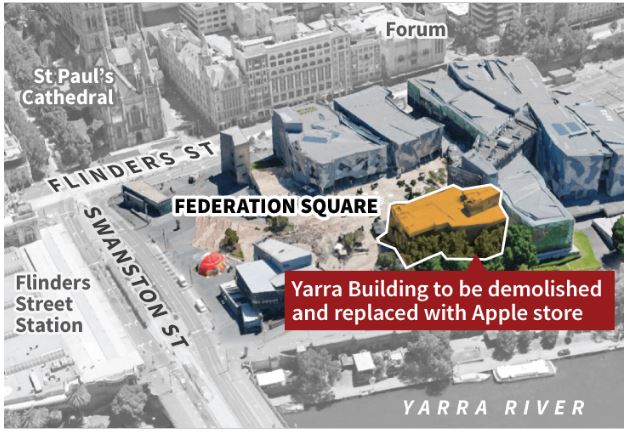 The story so far…

On 20 December 2017, the Victorian State Labor Government announced — 3 working days before Christmas — that Fed Square’s Yarra building would be demolished to make way for an Apple megastore. Public outrage ensued.

Three petitions went up on Change.org opposing the proposal. These petitions have accumulated over 100,000 signatures.”

Citizens for Melbourne formed in response to this public outcry and set up the ‘Our City, Our Square’ campaign to represent and give voice to the people whose right to speak and comment on the proposal has been silenced by the implementation of Planning Amendment C134 – which removed all right of public exhibition and public comment.

Demolishing the Yarra building and replacing it with an Apple megastore will destroy Federation Square’s public, cultural and civic role. Unlike a cafe, restaurant or bar, an Apple megastore has no potential to enhance its civic and cultural purpose.

An Apple megastore could go many places in Melbourne. But we only have one Fed Square. We are prepared to fight to keep it. Act now and join the biggest battle for public space ever in Melbourne.

7 reasons to support Our City, Our Square. Click for details

THE APPLE MEGASTORE DISREGARDS THE PEOPLE

The citizens of Victoria have been denied any opportunity to have a say in this decision. If not for Our City, Our Square the deal would already have been done. Any changes to our public spaces must undergo a genuine public consultation process.

Where else can Melburnians gather in the centre of their own city? Nowhere. So let’s keep Federation Square for us.

Fed Square operates under a Civic and Cultural Charter. It ensures Fed Square reflects "Melbourne’s cultural diversity" and gives back to the people of Victoria. That's why Fed Square has worked so well. The charter does not support the type of retail offering that Apple represents.

THE APPLE MEGASTORE PAYS NO RESPECT TO FED SQUARE'S DESIGN

The proposed store is at odds with the unique architecture of Fed Square and its purpose as a public gathering place. We are destroying our urban and cultural heritage. As a young city we don’t have much heritage to spare. Let’s save what we have.

BULLDOZING THE YARRA BUILDING DOES NOTHING FOR SUSTAINABILITY

The replacement of a building only 15 years old by one with an unknown lifespan and undefined future is wasteful and unsustainable.

THIS COULD SET A DANGEROUS PRECEDENT

If Victoria's premier civic space can be taken over by Apple, what other public spaces might corporations take next? How long until our parks, sports grounds and other cultural institutions are handed over to corporations in secret deals? When was the last time a global corporation said; “It’s OK, we’ve got enough.”

“LOSSES” AS AN EXCUSE FOR A FAILED MANAGEMENT MODEL

The operational costs of our Civic Square should not be met by a corporate lease. The government funds public spaces like sporting grounds, parks and gardens, public libraries and cultural institutions. They should continue to fund Fed Square. Sometimes value is more important than the cost. Federation Square management needs to be more innovative – not just flog off it’s land. 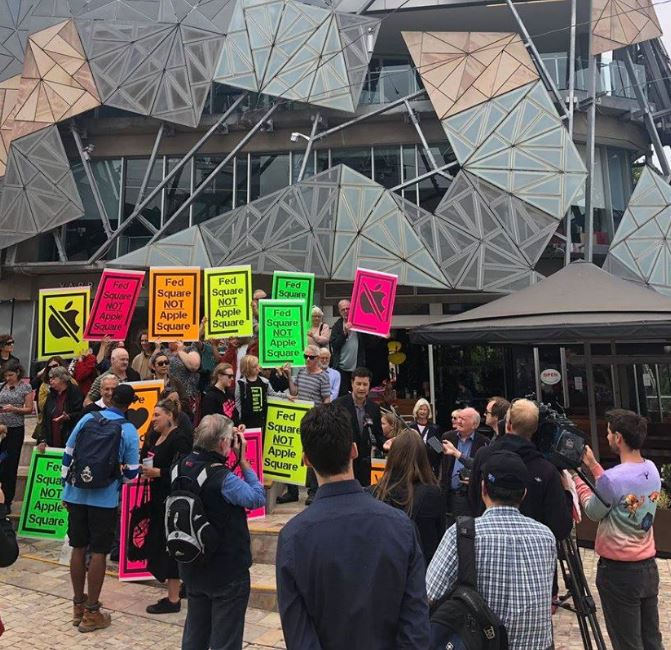 The Answer? The People’s Plan for Federation Square

After consulting with thousands of citizens, the Our City, Our Square campaign proposes a People‘s Plan for Fed Square in response to the State Government‘s decision to demolish Fed Square‘s Yarra building to make way for an Apple store.

We call on the State Government to work with the people of Victoria to develop a comprehensive vision for Fed Square to ensure its continued success as one of our most important civic and cultural public places.

To achieve this, Citizens for Melbourne and the Our City, Our Square campaign calls on the State Government to commit to:

REVERSE THE DECISION TO BUILD AN APPLE STORE AT FED SQUARE and commit to our 5 point plan:

1. Review and strengthen the Civic and Cultural Charter to place civic and cultural activity — NOT commercial activity — at the heart of Fed Square.

2. Establish a People’s Panel of independent citizens to give the community a voice in Fed Square’s future.

3. Review Fed Square’s funding to ensure its continued ability to provide the people of Victoria and the city of Melbourne with an internationally recognised public square that places civic and cultural activity first.

4. Review Fed Square’s board and management structure to ensure Fed Square has professional expertise suited to its civic and cultural role.

5. Prepare design and heritage management plans to guide future development at Fed Square and ensure it is consistent with Fed Square’s significant heritage value as a public, civic and cultural place.

Citizens for Melbourne acknowledges that Federation Square stands on the lands of the Kulin nations. We respect their traditions and support Indigenous voices as integral to the ongoing civic and cultural expression of Federation Square.